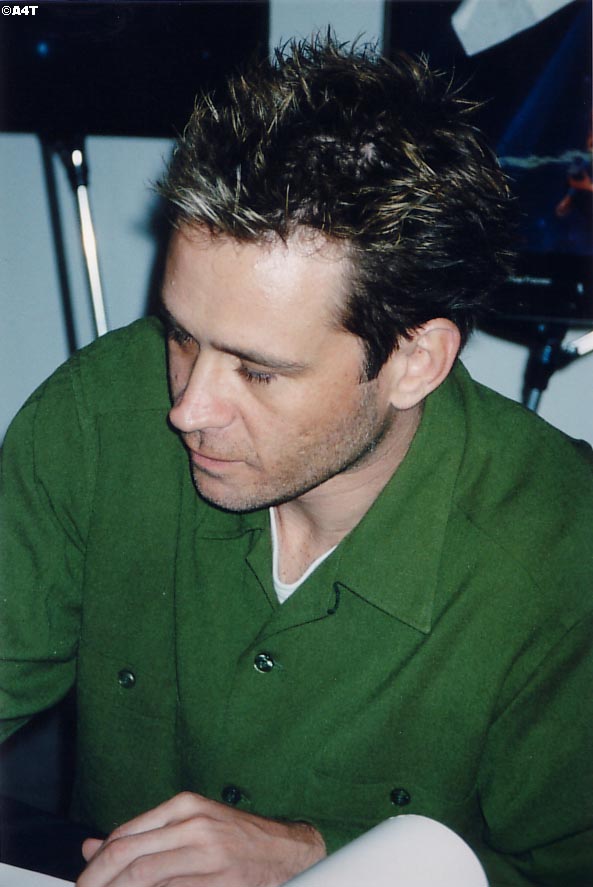 - these photos were taken at a charity auction I attended, and Trinneer was looking very good. Photos by me, bandybones, and wollem. Some excellent pictures. Also pics of Dominic Keating and John Billingsley. See them all at Vicarious Green.

from his recent speaking engagement at his alma mater, University of Missouri, Kansas City, where he got his Acting and Directing Master's degrees.

-= From the Summer/Season 3 press conference =-

And looking wonderful, I must say!

-= FRESH FROM THE LAS VEGAS CONVENTION =-

These three pictures were taken during Connor's autograph session. The woman in the background is his assistant. That shirt! He does it on purpose I think. He told *gort* that "he is comfortable in his masculinity". What a guy! The last one's a bit fuzzy but he does have the houseoftucker.com shirt in his hand. Open the images in a new window for the full size pic!

This one is the official photo op picture. You can actually see what A4T looks like! The cute one is Connor. Please DO NOT take this image, distribute it, or post it. You may link to it.

These three pictures were also taken during Connor's autograph session by our very own *bandybones*!

And StarTrek.com has their own Connor in Vegas pic!

Connor at a 2002 Convention Many wonderful shots of Connor onstage at TrekExpo 2002 in Tulsa, Oklahoma, from Starbase 21, such as this one! Note the tasteful shirt!